Its a week today that I was catching a plane to Cork on my way to the HearSay Audio Arts festival in Kilfinane, Limerick. Of course, I came with expectations. I knew it was going to be like no other festival I'd been to before. I also knew that I would come away with a head full of ideas and a heart full of inspiration. I wasn't wrong.

My first contact with fellow audio heads was at the car hire desk in Arrivals. I was nervous about having to pilot a new car in a new county with new people but off we all ventured out of the city and into rural Ireland. My thoughts were how polite and friendly other drivers were compared to back home in the UK.

Just over an hour later and we arrived in Kilfinane. Already we could see a few of our kind wandering around the town. One of the great selling points for me is its an audio festival set in somewhere far removed from an audio producers natural environment. Away from big cities, the studio. Not a studio in sight here, this is real get down onto the ground and smell it stuff.

How Kilfinane ended up being the home of HearSay is an interesting story and also a tribute to how the internet has changed the way we work for the better. Festival director Diarmuid McIntyre set up his production company 'Grey Heron Media' in his home town, running out of a former sweet shop in the main road ( I have thought of setting up my production company out of my camper van but thats another story)..

Kilfinane is the kind of place where everyone knows each other so it wasn't difficult to get the consensus on opening up the town to an international audio festival, just for a weekend. 2014 was the year of the first one, another in 2015 and then a break until this years. The festival numbers are limited, simply because the town isn't big enough to accommodate vast numbers of people. I was lucky to hear about it in time to apply. How I didn't hear about in 2015, I don't know but my head was in politics and the General Election at the time so I will forgive myself.

Thursday 8pm and I'm in the old church with Black Paddy and a the Kilfinane community choir. Paddy is from South Africa and has taught them some South African songs. They've taught him some Irish ones and this forms their interesting repertoire.

Friday morning. HearSay wasn't going to officially start until 4pm the next day, so with time to myself I planned a bit of time to get to see as much Ireland as possible. Friday morning, I was up bright and early and into the car, heading to County Clare on a bit of a Father Ted pilgrimage. For those who don't know, Father Ted was a very successful sit com made in the mid 1990s about three Irish priests and their batty housekeeper who live on an island off the Atlantic coast. Google maps told me that I could be there within an hour-forty.

By the time I was through the Limerick Tunnel, HearSay seemed a long way away, as indeed did the world of audio production and my brain was firmly fixed on Father Ted nostalgia, with the Divine Comedy playing away. I encountered rougher and narrower roads until I turned a corner and there was the parochial house which looks exactly the same as it did on the telly.

I couldn't hang around though, I had Kilfanora typed in on the SatNav and I was in search of Vaughan's Pub, another Ted location and home of Craggy Island's Chinese community.

Driving over the beautiful Burren National Park, it took me the best part of an hour to get there and once I did, I realised I was running out of time. A quick run down to the coast at Lahinch and it was time to head back in order to make the 4pm opening ceremony.

Trying to put Father Ted out of my mind, I arrived ten minutes before and grabbed a seat next to my host 'Black Paddy' who had opened up his 1800 lodge home to two other HearSay participants, Brett from Sweden and Jackson from the States.

Hearing the prize winning entries, I realised that this was going to be all about audio with no boundaries. When I was studying for my MA in Radio back in 1999, the only way for our work to get an audience was through traditional radio and in the UK this meant BBC Radios Four and Three. A depressing thought at the time and not exactly a great incentive. So of course, you train yourself to make radio that 'fitted' their remit. If you had any hope of anyone hearing it beyond yourself and your friends this was simply what you had to do. I left my hopes of making radio documentaries that would ever get heard on the steps of Goldsmiths College and went into a career as Broadcast Assistant for Radio Three. Well at least I was getting paid for working in radio even though all the programme admin that made up the best part of my job wasn't exactly Charles Parker's Radio Ballads.

But is 2017 now and god have things changed! All hail the internet which I used to mine for sound effects in 2000 but there was no such thing as podcasting or even iPods- we all recorded on minidisc in those days. This American Life was already out there, being distributed by public radio networks as early as 1995 but it wasn't until the Public Radio Exchange and Podcasting that it grew the wings it has today. Did Adam Curry invent podcasting? Can I live with the fact that an oversexed MTV VJ created the medium that saved radio?

Looking around the old church, I could see I was towards the older end of the HearSay demographic. Without sounding like some patronising old bag, I found this extremely uplifting. Creative audio was alive and kicking, video has not killed the radio star and as technology develops, audio is revived and goes from strength to strength.

So the festival itself. There are the presentations and the workshops. Then there's the socialising which on the Friday night led me down the path to a horrendous hangover in the morning which lasted most of Saturday. That night I veered off the path of socialising with other audio people and instead visited one of the more out of town pubs to hit the Guinness. I had to- I couldn't speak while I was processing the award winning entries I'd heard earlier. Instead I sat and watched Graham Norton ('He's Irish, don't you know') with three locals, pints of the black stuff appearing without request and of course with no complaint from me! By the time Black Paddy came to get me I was already four down and we spent the rest of the night in McGrath's where I ended up drinking hot whiskies and crying to Pat McGrath's lovely Gaelic singing.

As I said, Saturday was fuzzy. I dragged myself to Emer Horgan's workshop on voice- breathing exercises and facial contortion did wonders for my splitting head. I wasn't alone if the slightly boozy smell from my participants confirmed...or maybe it was just me. By the time we'd finished, this beast of a headache was taking over just in time for me to bump into Alan Hall, my ex tutor and Radio Three colleague.

There was only one thing to do- get some of those add hot water noodles and head back to the lodge where Paddy as also nursing a headache. A few hours sleep and I headed back into town to listen to Cathy Fitzgerald's audio chocolate box which fortunately was simply for the ears and not for the stomach. By the time the beer tasting accompanied by audio came around I was almost back to normal. Lets say I went easy on the beer that night and was in bed by ten.

Sunday morning and I was rewarded with a clear head even though I'd missed out on the inevitable socialising that happened the night before. At 42 I seem to no longer be able to have a heavy night and be fully 'present' the next day, so choices have to be made.

Now was my change to do the 'Stranger Kilfinane' geo located audio walk.This was made for the previous festival and has never gone away, always waiting to be downloaded and played out. Its was made on Calvium's Appfurnace which was around before I discovered online geolocation platforms such as VoiceMap. Unlike VoiceMap walk, Stranger Kilfinane encouraged me to look at my phone, to look at photos. What I loved about the walk was the use of oral history- hearing the occupants of the buildings tell their stories. Some of the shop names have changed since the audio was recorded- an inevitability when making geolocated audio walks. Mr Kebab is now Tasty Bites- a takeaway or 'chipper' as its known to the locals. Back when the tour was recorded, it seemed to be simply that, a kebab shop but these days its a one stop shop for anything fast food. You can get a kebab, you can get fish and chips, you can get curry. They should rename it the place 'The Hungry Audio Producer' going by the amount of business they do over the HearSay weekend!!

Having heard Grey Heron's 'Take No More' a documentary about a standoff between community and subcontractors at the local school, I was keen to listen to more Grey Heron material. Already falling in love with Ireland and Kilfinane, my ears were hungry for more of their beautiful crafted material. Sitting in a small dark room in the local school, we listened to Solstice. If you could package up the warmth and love in this community, they did just that.

The festival was coming to a close. This is when I met Delores who turns out to be just down the road from me in Seaford. Leading a "wake' for dead audio, we said goodbye to 'tape' that simply was never used either because the creator felt it wasn't very good or couldn't find a home for it. If only I'd know about it in time, I have a whole hard drive full of the stuff. I'll know for next time...which incidentally is going to be in the Spring of 2019.

A week later post HearSay and I'm still digesting. A chance game of Cluedo on my last night has spawned an idea for something. Watch this space... 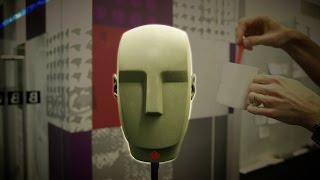 Sound all around- working with binaural and 3D audio